I love it when I taste something in one country and it reminds me of my own country, my college roommate and many memories, because even though I am in a completely different land, the taste is the same. I ate traditional Dutch donuts called “Oliebollen” a few months ago in Eindhoven, and that was what happened the moment I had my first bite: gee, this tastes exactly like “Pişi”!

It was a big discussion among my roommate Didem and our friend Deniz back then: is it called “Pişi” or “Bişi”? Didem came from Izmir, in Western Turkey and Deniz came from Mersin, in Southern Turkey. I, on the other hand, just watched this discussion generally while eating one after another of these lovely donuts, in a regular weekend breakfast we had at our apartment. I don’t know if where I come from, Black Sea, there is yet another version and name for these donuts, but whatever they are called, they are extremely delicious. 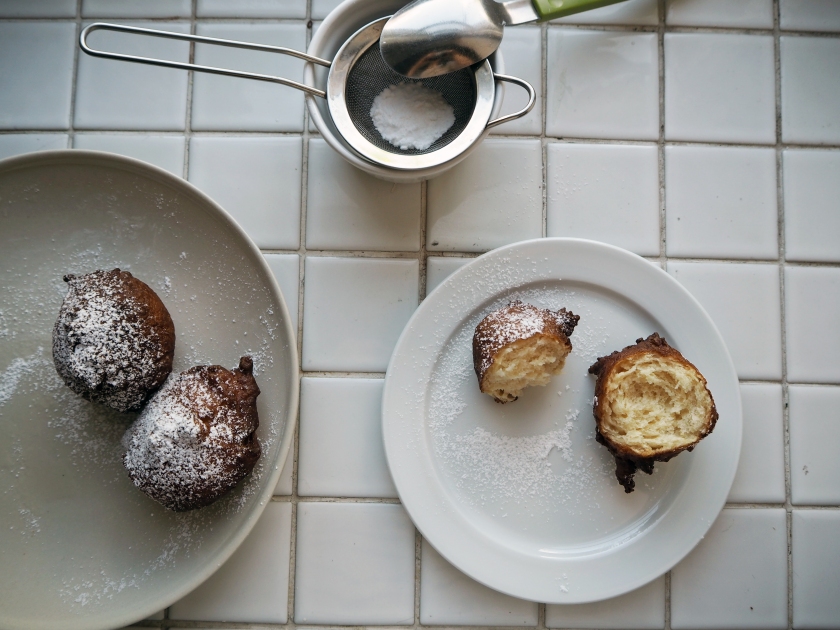 A few months ago, I was in the Netherlands for the first time in my life. Many friends have already been to the Netherlands and especially to Amsterdam, but I was late as usual. Anyway, I went to Eindhoven to stay with my dearest friend Caroline and her mother for four days and then went to Amsterdam for another two days. I cannot praise enough the magnificent Dutch bread and the simple sandwiches turned to a festivity thanks to the bread. Yet, this donut, named “Oliebollen” beat everything else because of the memories it brought back..

There are two main types of oliebollen: one plain, the other with raisins in the dough. You can eat them with or without powdered sugar and in any case it is tasty, but powdered sugar does add some more richness to the taste. But I do not recommend you to eat it with powdered sugar if you have a red lipstick and for example if you are on a date at the same time: because you get powdered sugar all over you while eating.. yumm…

I like the plain version more, so here I will give the recipe for that one, but the only difference is to add raisins in the dough before you leave it to rise. You should eat them when they are warm, preferably right after they come out of the pan. In the Netherlands, in market squares and many other places, there are kiosks where they have giant pans with sizzling oil in which they fry the dough and give you your oliebollen right away.

You can make these donuts for breakfast, for an afternoon tea or any other time as a snack. Spreading some cinnamon is also a way to eat it but I only tried with powdered sugar.

So, prepare a giant frying pan and enjoy your donuts!
—

2. Sprinkle yeast on the water and leave it to activate for 10 minutes, it should bubble and bubble. 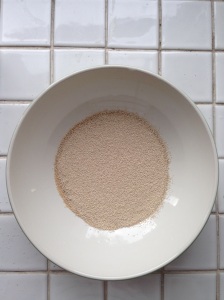 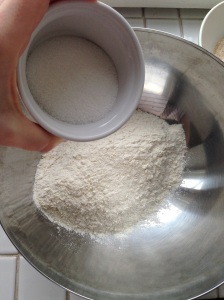 4. Make a well in the middle of flour mixture and add eggs and yeast mixture. 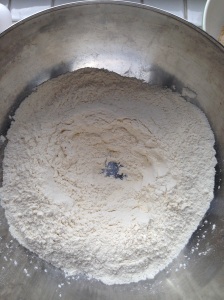 5. Add half of the milk and whisk until the ingredients are incorporated. 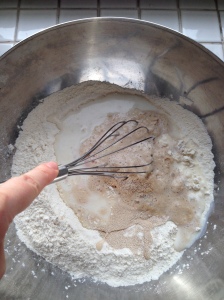 6. Add the other half of the milk and continue whisking until all ingredients are well incorporated and you have sticky dough (if the dough is too liquid in the end, you can add a little bit more flour but be careful, don’t add too much – otherwise the donuts will be too hard). 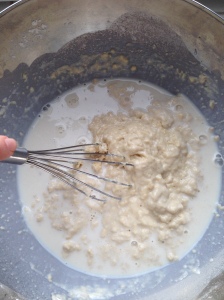 7. Cover the dough with a damp cloth and leave the dough to rise and double for about an hour. 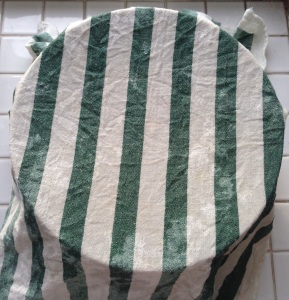 9. In a big and deep frying pan, put 2 lt. vegetable / sunflower oil on medium heat and let it fry. It takes a while to fry. You can check if it is ready or not by sticking the end of a wooden spoon all the way down to the base of the pan: if there are bubbles immediately forming around the spoon, then the oil is ready. 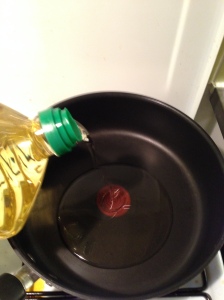 10. Take two table spoons. You will take one spoonful from the dough and helping with the other one to shape, you will have more or less the same amount of donuts. Since I had to use both of my hands, I could not take a photo of how to make it, sorry! 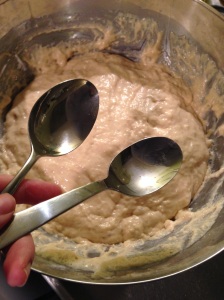 11. Put the dough in the frying pan and leave it to fry. You will see that they will get bigger as they fry so do not put too many pieces at the same time. In my pan 6 at a time was just enough. Turn them often inside the oil so that each piece fries evenly. You should have golden brown pieces in the end. Take them out of the pan with a sieve spoon and put them on a kitchen towel to get rid of the excess oil. Spread some powdered sugar on top (a lot of powdered sugar, if you have a really sweet tooth like the Dutch) and eat happily!

Join 1,196 other subscribers
Follow My Dear Kitchen in Helsinki on WordPress.com