I love searching for old, ancient recipes from around the world. It doesn’t only give me an idea of what people used to eat or how they cooked, but it gives an idea about their life in general and puts food in a historical context.

This recipe partially consists of such an ancient recipe, a Medieval Arabic spice mix called “atraf at-tib”. I went through several texts to understand what it actually is, and I found this sentence, a citation as definition of atraf at-tib:

” . . .definition of “atraf at-tib”; it is a spice mixture very often used in cooking; this mixture includes lavender, areca (betel) nut, bay leaves, nutmeg, mace, cardamom, cloves, rosebuds, beechnuts, ginger and pepper, this last being previously ground separately.” [Rodinson, “Recherches”, pp. 132, 152. (I took this citation, which is a translation from the original text in French, from here.)

So, I saw a version of this spice mix on an eggplant recipe on delish.com and I made my own spice mix from the ones I could find on the list. I modified the eggplant part too: in the original recipe it calls for eggplant cubes to be boiled and then added to spices that are roasted with sesame oil. I changed the whole thing to be sautéed in sesame oil instead of boiling, I like the nutty taste this brings.

I watched a documentary series over the weekend about 6 spices that changed the course of history (a BBC documentary that you can find here). Since then I am looking at the spices in a whole different, refreshed way. After all, life would be extremely dull without spices, wouldn’t it?
—

If you want to make an open sandwich:
a few slices of your favourite bread (I bought fresh, whole wheat baguette for this) 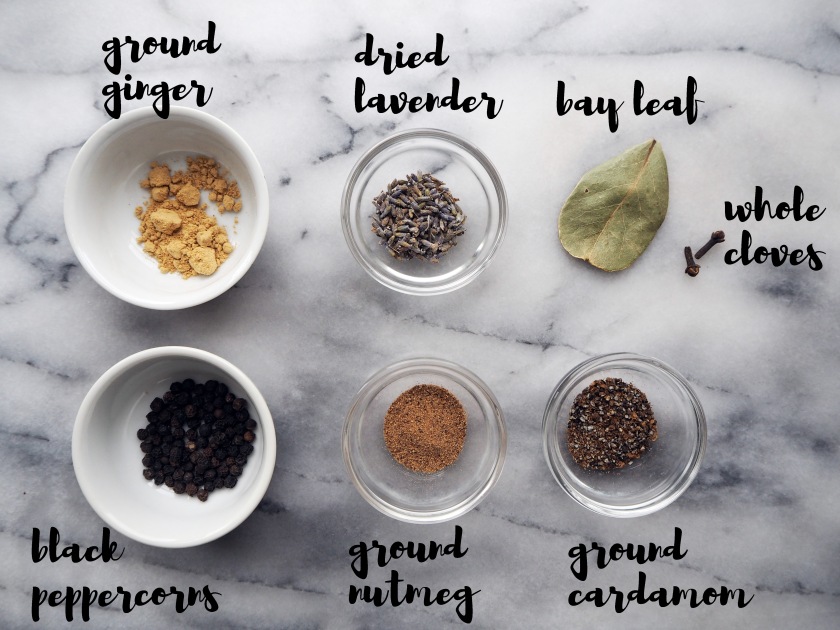 1. Cut the eggplant in small cubes. Put in a bowl / container and cover with water. Put 1 tsp salt, mix it (just mix with your hand or a spoon). Let it sit for 20 minutes. This will remove the bitter taste of eggplants. 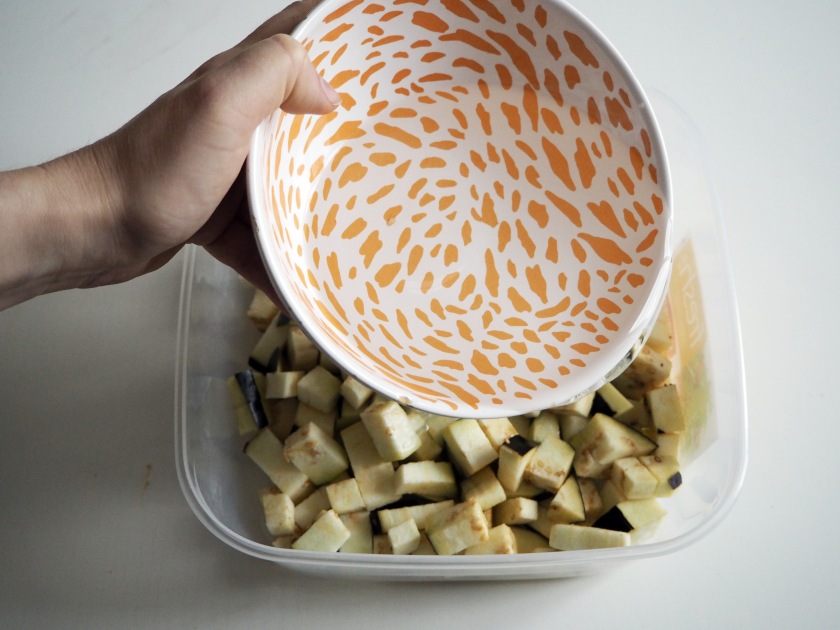 2. While eggplant is in the water, prepare the spice mix. Put all the ingredients for atraf at-tib and grind and mix them using a mortar and pestle. Now this takes tons of time so if you have a spice mill, then use that!! I definitely decided to buy one after my left arm gained extra muscle from doing this spice mix.. When the mix is ready, put aside.

4. Drain the eggplant cubes and pat them dry with paper towel (doesn’t have to be too dry, just get the excess water as much as possible). In a slightly big pan, warm sesame oil in medium heat for about a minute. Add minced garlic and eggplant cubes. Cook them all by constantly stirring with a wooden spoon. 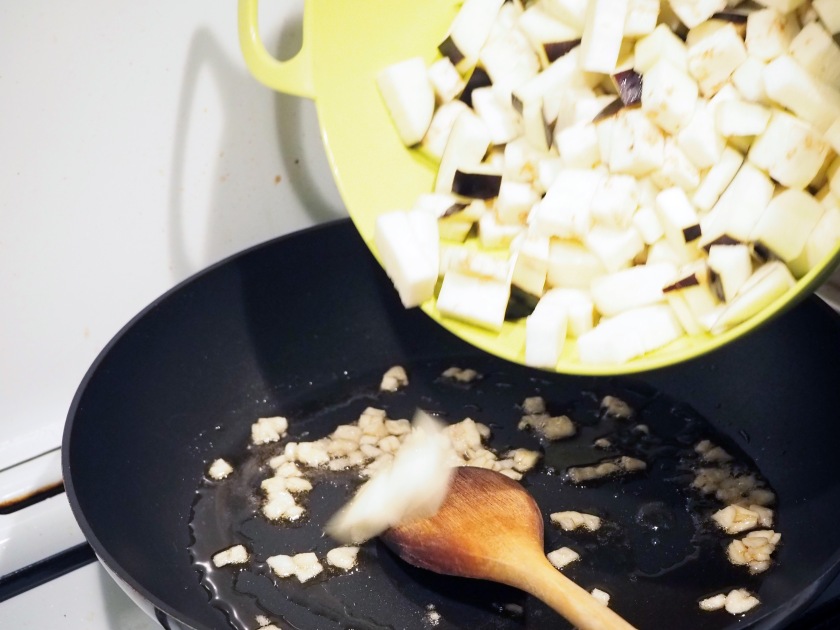 5. Once the garlic-eggplant mixture is cooked, add cumin, coriander, 1/2 tsp salt and roughly half of sesame seeds. Continue cooking for a little more again by stirring constantly, until you are sure all the spices are well mixed with eggplants. 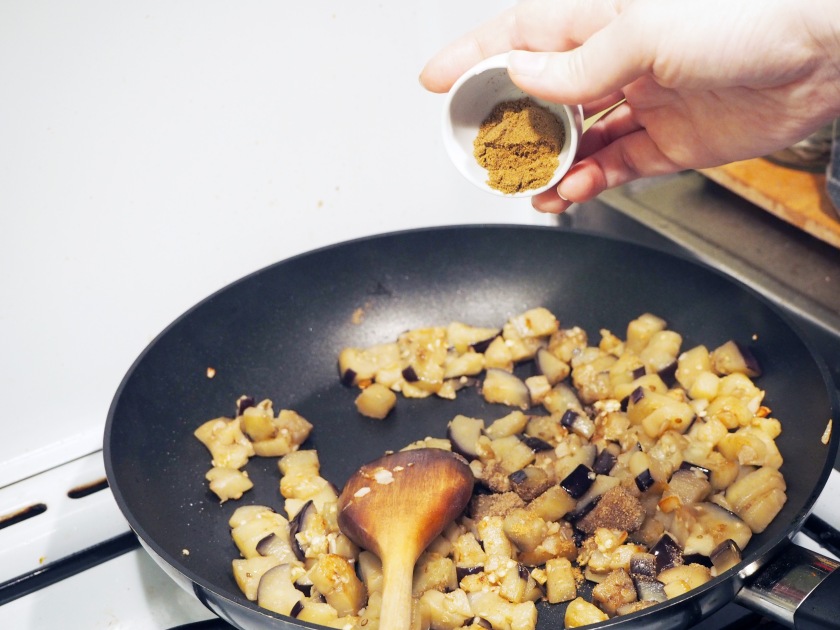 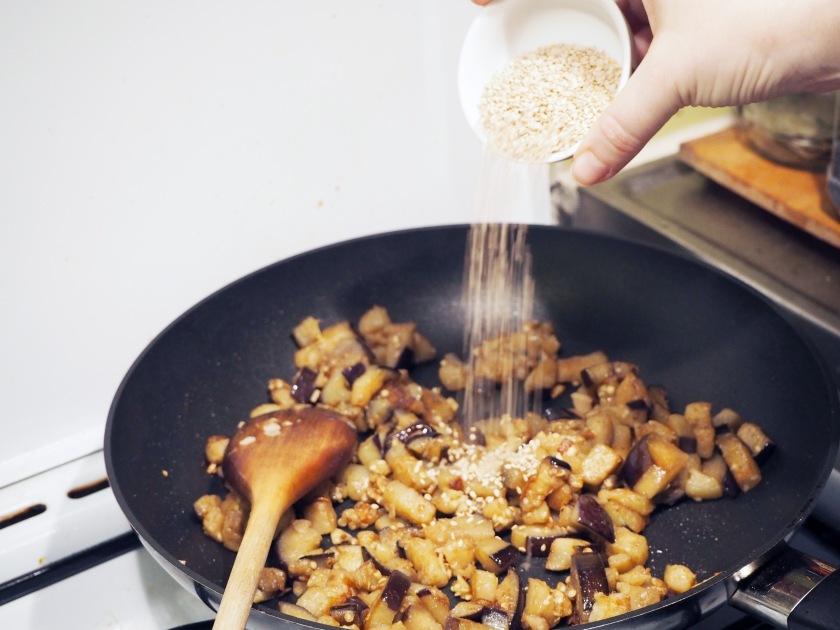 6. Put cooked eggplant in a container large enough to do some more mixing. If you are planning to make an open sandwich, then do NOT wash the pan yet. Add roughly half of atraf-at-tib and yogurt and mix well.

7. (at this point I put the mixture in another bowl, just for fun…) Before serving, sprinkle the rest of sesame seeds and atraf at-tib on top of the relish.

8. To make a toast / open sandwich: toast bread slices in a toaster first a little. Then transfer them to the unwashed pan, put the pan on medium heat, (you may want to press on the bread slices with your hand), let at least one side of each slice to get the remaining aromatic sesame oil on the pan. Top with the relish (the relish will taste much better if you let it cool for about half an hour). 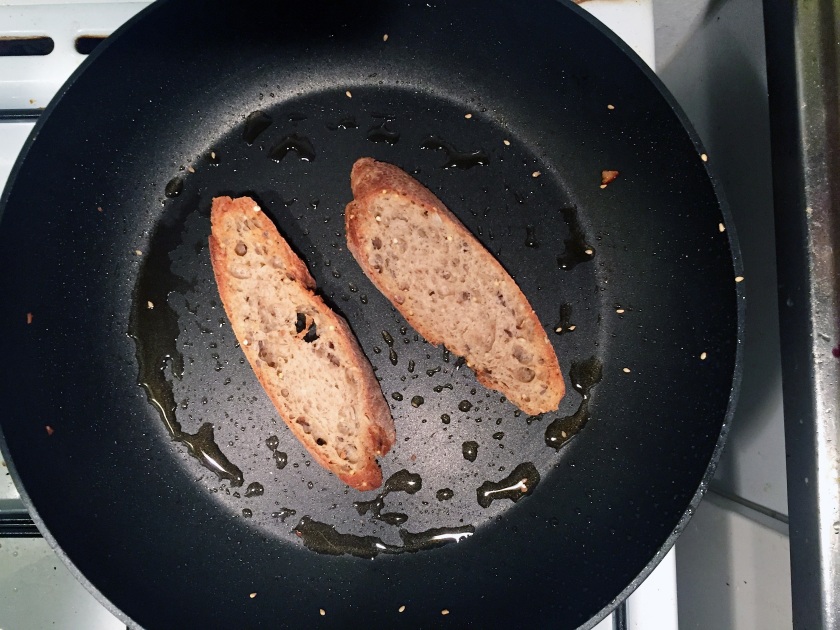