Last week I had my close friends from school for dinner. It was very refreshing to cook for friends in between all the catering gigs! I made a nice little menu from baba ganoush to stuffed peppers, but I also wanted to try something new. And as the absolute lover of phyllo dough, of course I baked something with it instead of many other options! 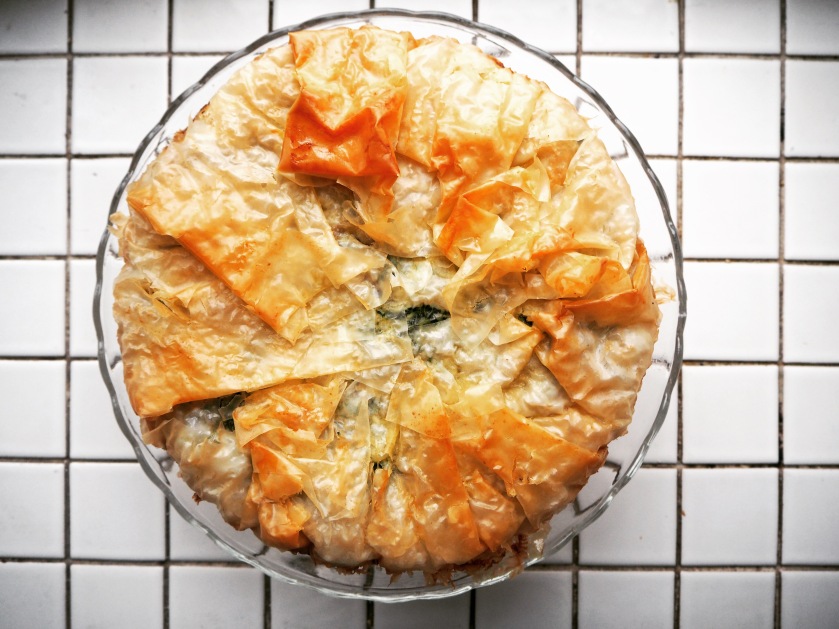 So, I believe we can call this pie as “börek” in Turkish, though, it is slightly different than my regular “börek”s. The making of this, especially creating the phyllo layers, reminds a bit more of a pie. Anyway, I will call it a pie in this post because it’s easier to write! It is a recipe I first saw on Grains Are Good book, and then I did a bit of twisting and turning and voila! 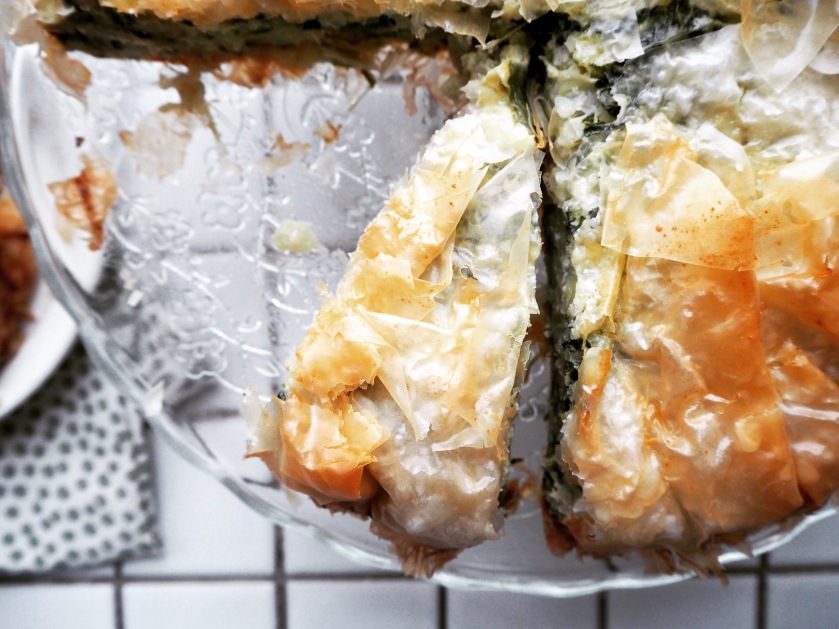 This pie has a large variety of ingredients which make it extremely rich in taste. There is the moist, juicy spinach and leeks, there is rice and mushroom which make it pretty filling, there is the anise-like flavour from fennel which is not overpowering. And there is of course some cheese and egg to keep everything stick together and give even more flavour.

One thing that you need to pay attention to is to remove the pie from pan as soon as it cools down a bit. If you leave it to cool completely or to cool a rather long time in the pan, then you will lose most of the crispiness of phyllo. It will still taste great, don’t worry. But that nice crispy texture is phyllo’s signature (and I love it!) so it might be a shame to lose it. 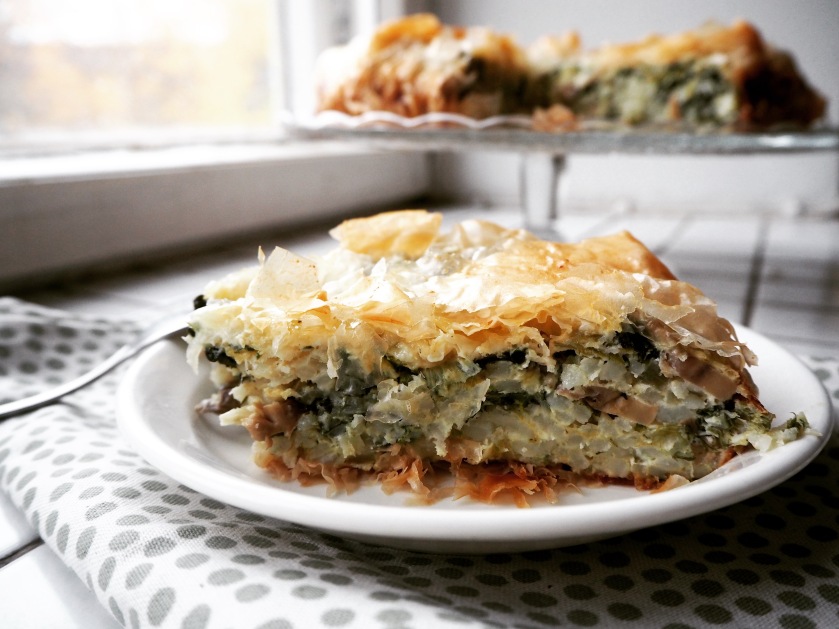 This pie, all by itself, is so filling and rich that you can practically eat it alone as a main dish. However, you can also have thin slice of it and combine with fresh, basil salad to make a light but nourishing combo. I think it will also be a nice brunch dish if you like brunching with friends! Enjoy!
— 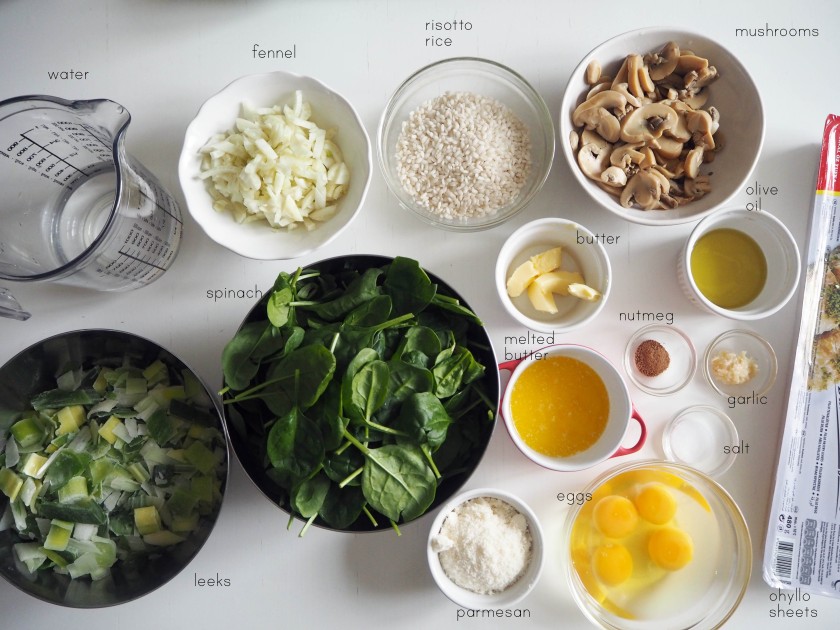 1. Preheat the oven to 180C. Brush a 26cm springform pan generously with olive oil and put aside. 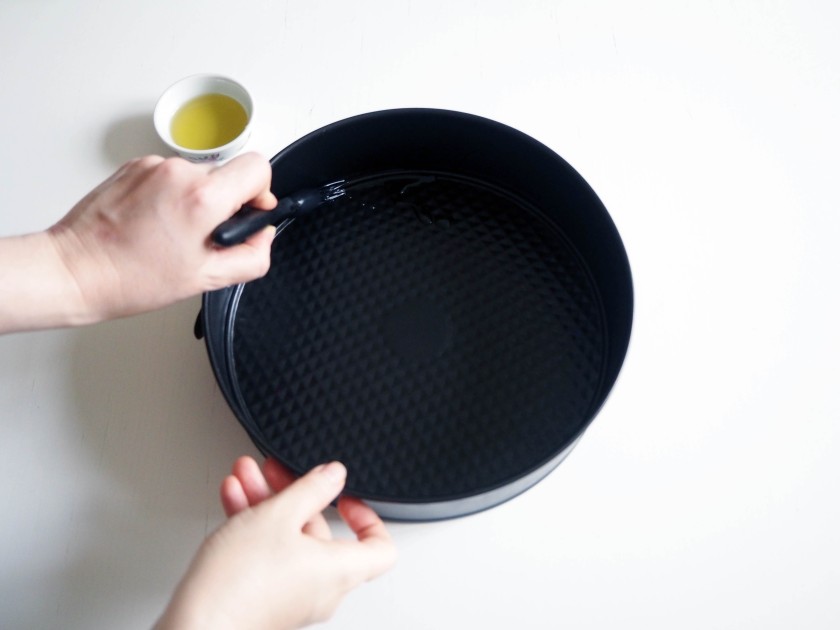 2. In a large pan or a wok, put butter and olive oil and let it warm on medium high heat for half a minute. 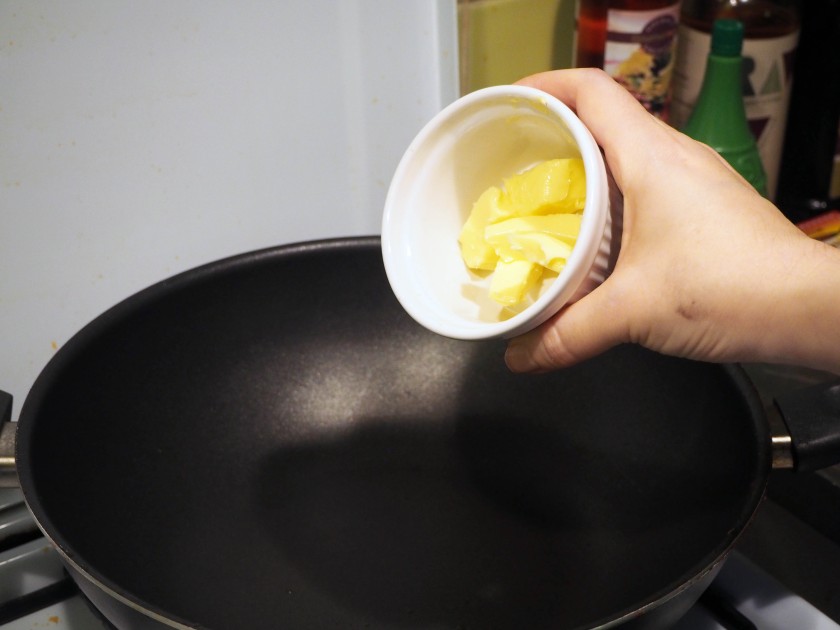 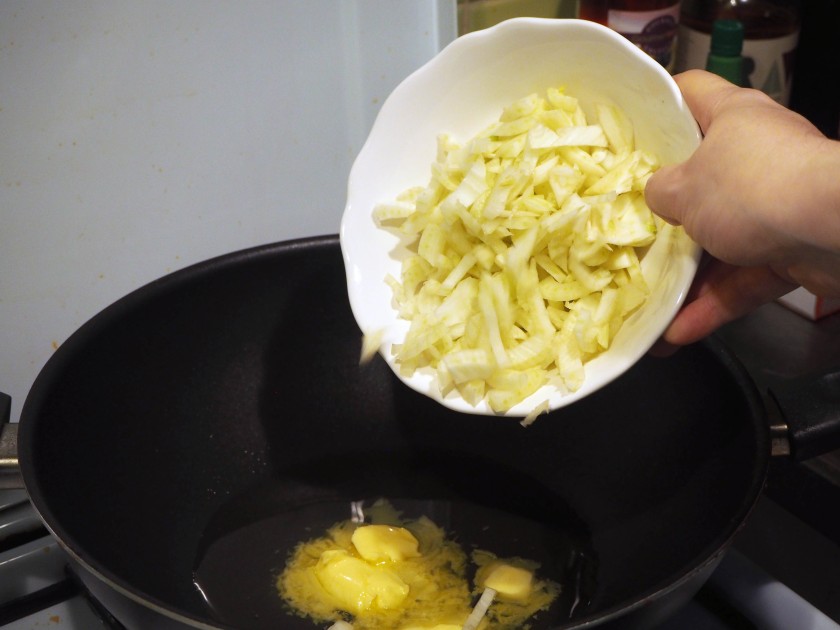 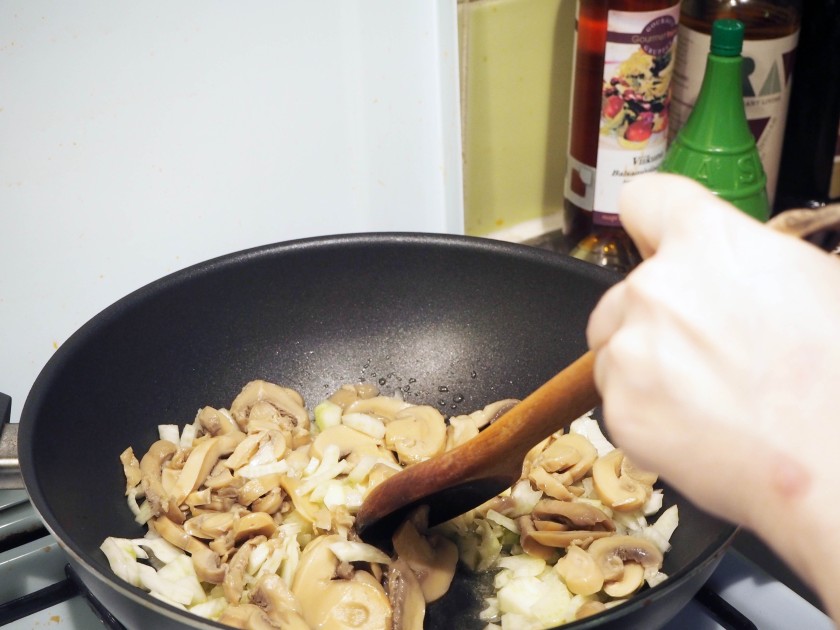 4. Add leek and garlic cloves and continue cooking by stirring for 3 more minutes until leek is softened.

5. Add rice, salt and nutmeg and continue cooking by stirring frequently for about 1 more minute. 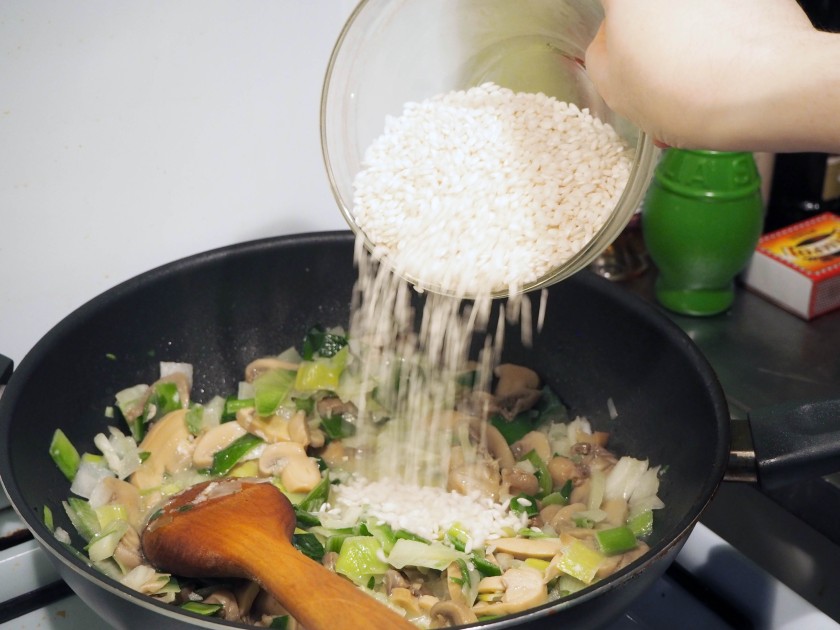 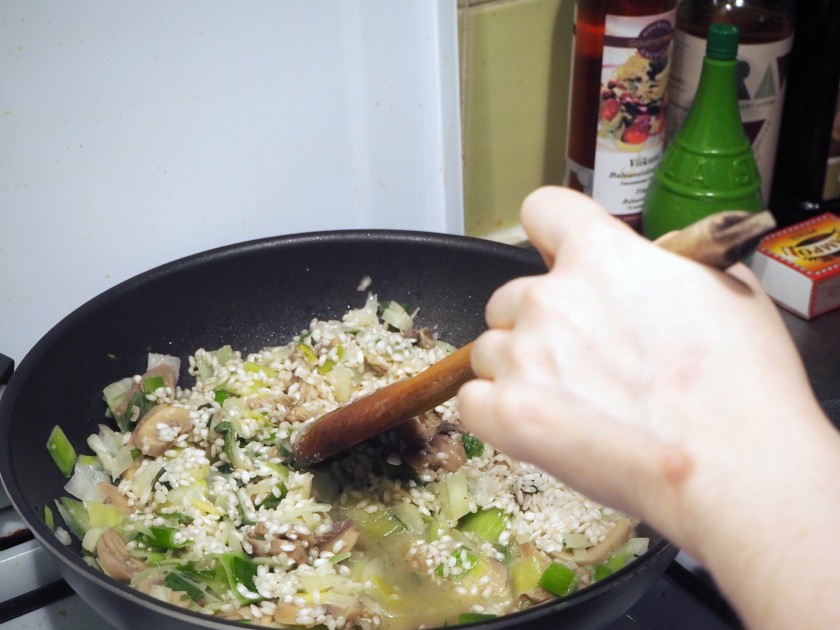 6. Add spinach and water (or vegetable broth), stir, turn the heat to medium and let it cook until all the water is absorbed. When it’s absorbed, take the pan out of the heat and let it cool while you prepare the phyllo sheets. 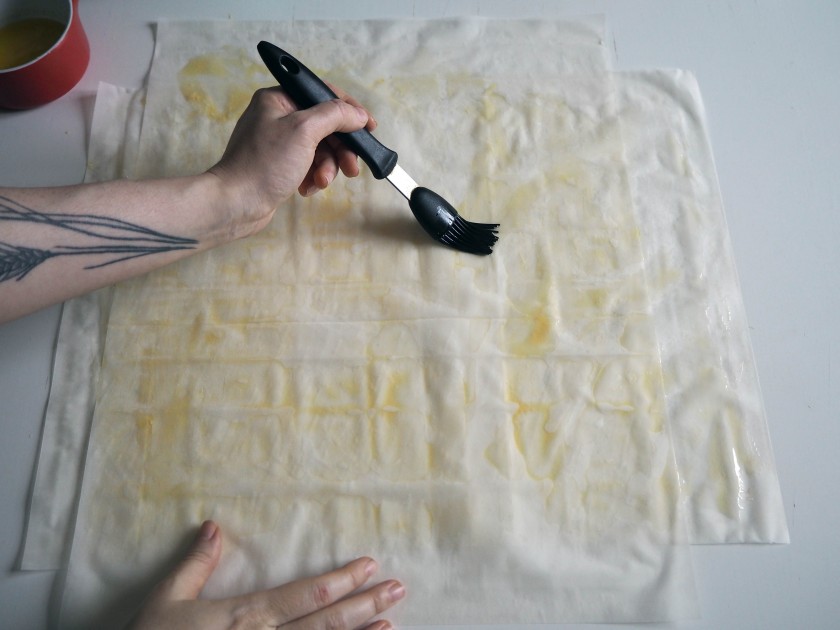 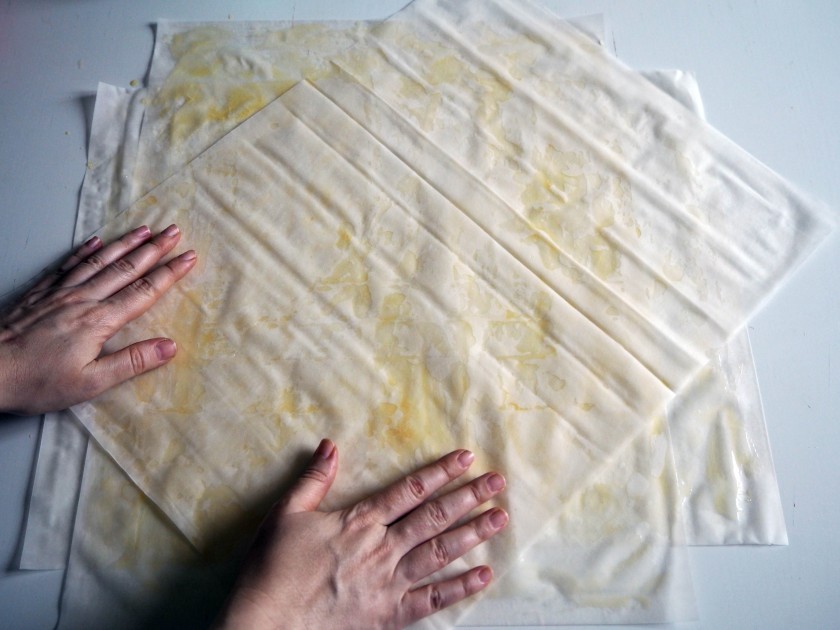 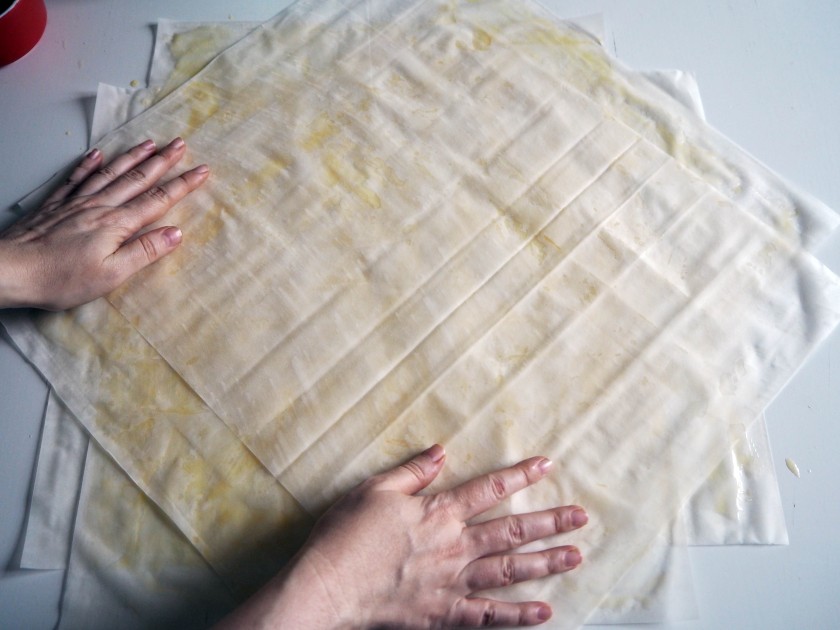 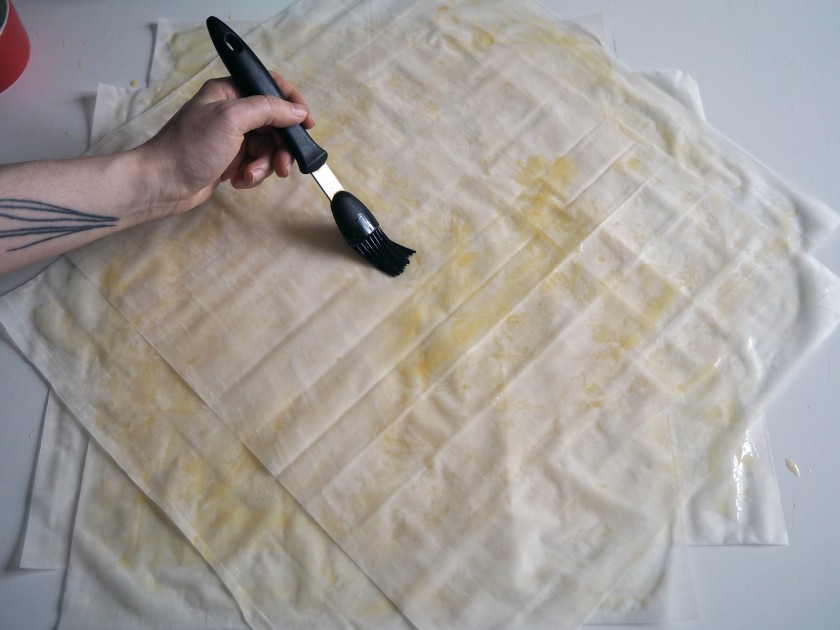 8. Put the phyllo sheets on top of prepared springform pan and by gently pushing the dough into the pan, let it take the shape of the pan (there is no photo of this step because of a technical problem with my camera, sorry!!). There will be extra parts of phyllo hanging outside of the pan, leave it like that for the moment.

9. Transfer the cooked filling to a large bowl. Add parmesan and eggs and mix well. 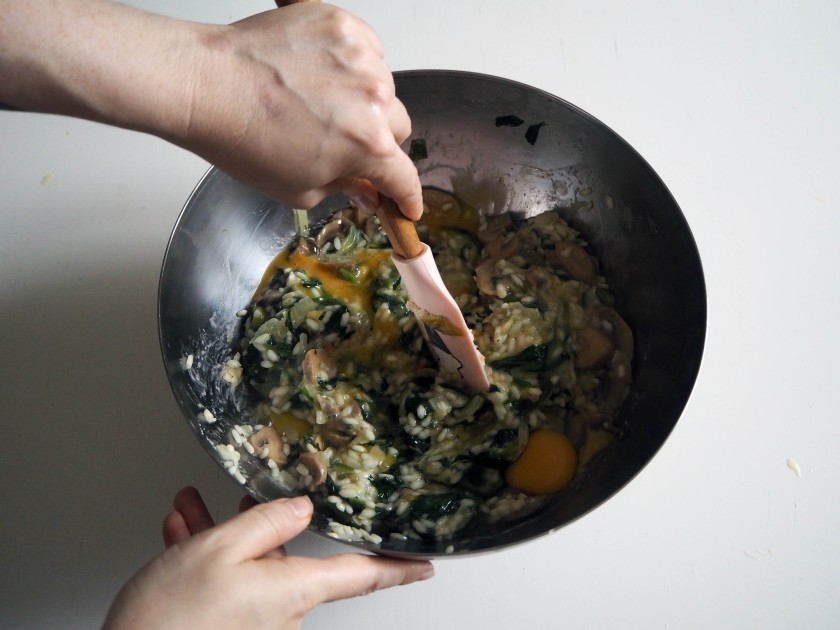 10. Pour the filling into phyllo crust. Smoothen the surface with a spatula. Fold the remaining parts of phyllo hanging out of the pan on top of the filling to cover the whole surface. 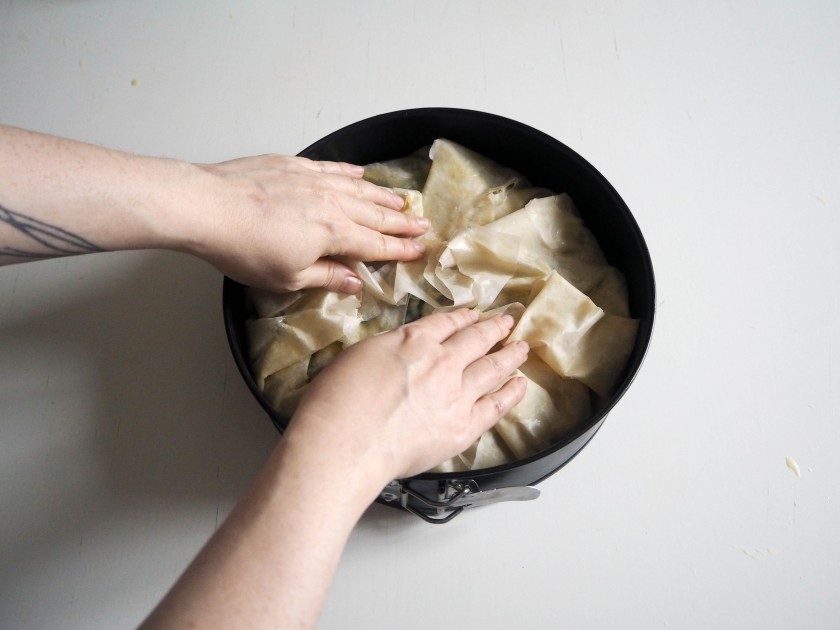 11. Brush the top phyllo surface generously with remaining melted butter. Bake for about 45 to 50 minutes, until the crust is golden and crunchy. Take it out of the oven and let it cool for 5 minutes and then take out of the pan, transfer to a plate or preferably onto a wire rack. Enjoy as a main dish or as a light treat with some tea, but most important of all, enjoy with friends and family!

Join 1,196 other followers
Follow My Dear Kitchen in Helsinki on WordPress.com