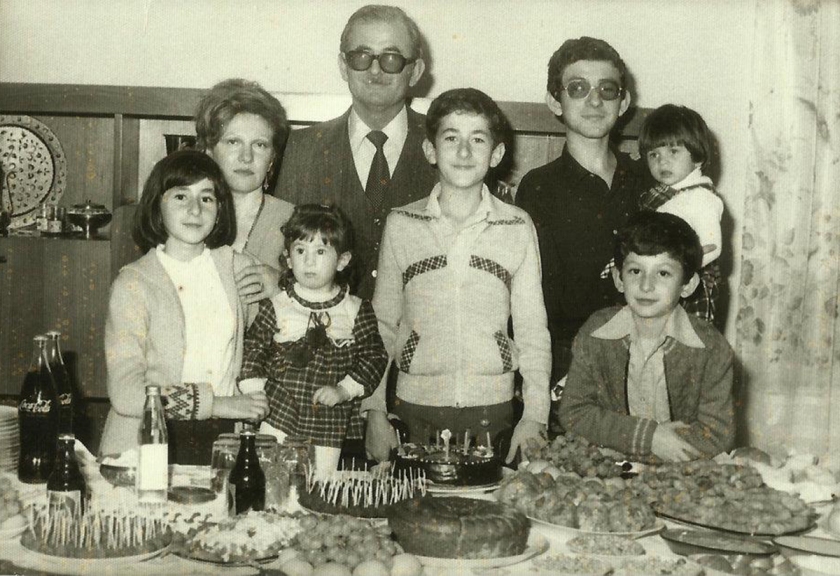 – Mum, do you remember the cake that I was scared of? What was the story of it?
– Of course I remember!!! You were about 3-4 years old. It was Sirri’s (my oldest brother) birthday and I wanted to bake a surprise cake for him. I prepared the batter and searched for a cake mould. I had this one shallow mould, and I thought I could bake in it. I asked Hakan (my middle brother) if the cake would be baked well in this one, and he said yes.
– But wait, why did you ask my brother? He never ever baked anything in his life!
– I don’t know! I just did! He was around! Anyway, I poured the batter in the mould and baked the cake, completely forgetting that it would rise.. So the cake started to rise, pouring out of the mould, making a big mess inside the oven with the pouring batter burning.. I had to take the cake out before it baked completely. But I did not stop there, I decorated it with chocolate and served the half-baked cake with probably a burning smell, looking horrible inside, as the surprise cake. People ate a little bit of it just to be polite. But I still did not stop there! I put the remaining cake in the fridge and the next morning I asked you: Aslihan would you like to have some cake?? But you were so scared of this monster I called a cake and started crying (literally): “please mum, please, don’t take it out!!!”

My childhood was a rather good one. As in any family, there were problems every now and then, but generally, we were doing quite ok. The most vivid memories from my childhood, though, are the lunches and dinners, where all the family, from siblings to cousins, gathered together for many long hours. Everyone talked at the same time, so everyone had to shout. There would be an enormous amount of food on the table, especially when we were in our house. We would continue eating remaining food the next day. My aunt (my mother’s younger sister) on the other hand, would cook just the right amount and it would always be a joke among the family. Everyone would make jokes. Everyone would laugh, yes, at the same time. Our neighbours probably hated those days because of the noise we made. But we didn’t care, we were happy.

The most common food for these dinners was “manti”, Turkish dumplings (you can find the recipe in this blog). If my mother did not want to cook manti for hours, then my father probably wanted to order “pide”, a type of flatbread topped generally with cheese or ground meat. The one they made in Istanbul was closed, whereas the one in Sinop, my absolute favourite, was always open. As an ever whiny little girl when it came to food, I did not like eating Istanbul’s pide for some reason, but I cannot remember what my mother would come up with to feed me.. We would either drink water or Coca-Cola, and if I were sick, having a sore throat or something, my mother, yes, she would warm up Coca-Cola in a coffee pot!! 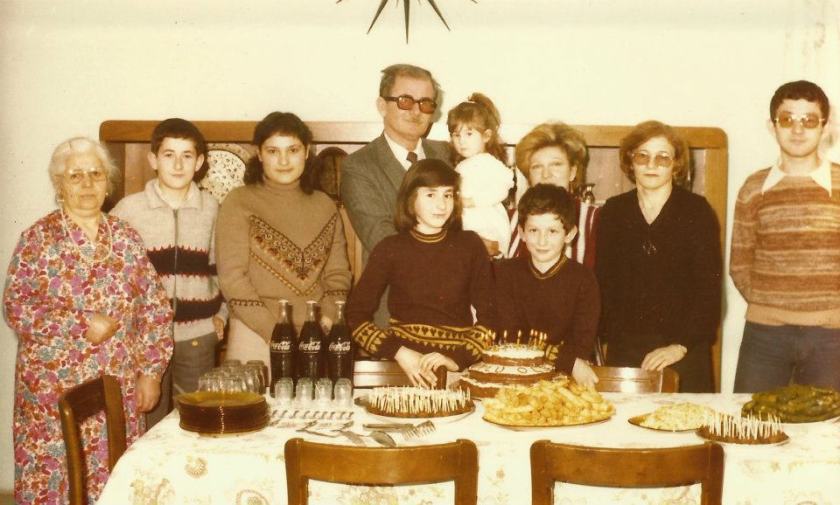 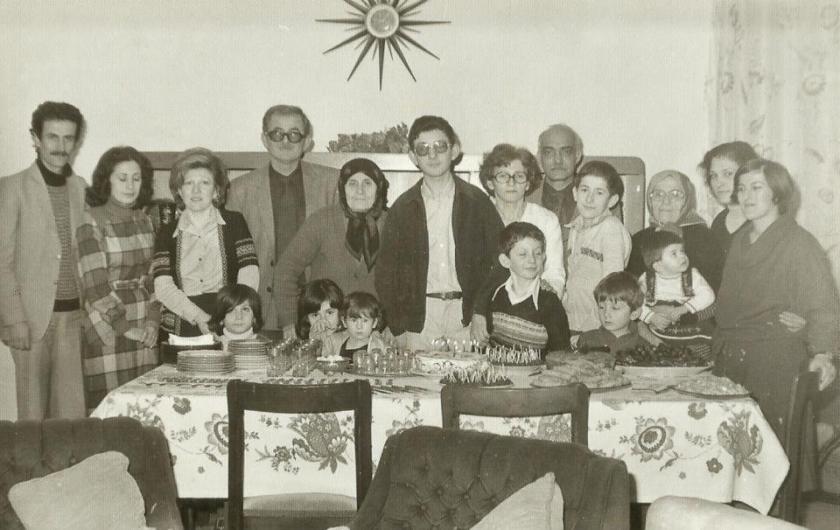 The special occasions for big family lunch or dinner, apart from being just a regular weekend, were Ramadan feast, New Year’s Eve or birthdays. The star of Ramadan table would be beef stew, whereas the star of New Year’s Eve would be rice with chicken, stuffed vine leaves and olivier salad (which we called “Russian Salad”) with boiled and sliced carrots, potatoes and peas and which are mixed with mayonnaise.

The birthday tables were another festivity, like a big show of my mother’s cooking skills. During my teenager years, the cake would be generally ordered from a patisserie, my mother was not very ambitious with birthday cakes at that time. But she did an incredible job with birthday cakes many, many years ago. Looking at the old photos, I can see that she even made cakes with many layers! It is a pity that I was really small back then and cannot remember the taste now. But I do remember the unfortunate incident that I started this blog post with.

But forget the cake, my mother did an incredible job with other things on the birthday tables: mini meatballs (with carefully inserted toothpicks on each), stuffed vine leaves, “sigara boregi” – deep fried pastry rolls with cheese filling, “dolma” aka stuffed green pepper, various kinds of pastries called “börek” in Turkish… As a ritual, when the table was ready, we would stand behind the table and pose altogether as you can see in the photos. These are just a few photos I have, but there are tens of these photos in reality!! 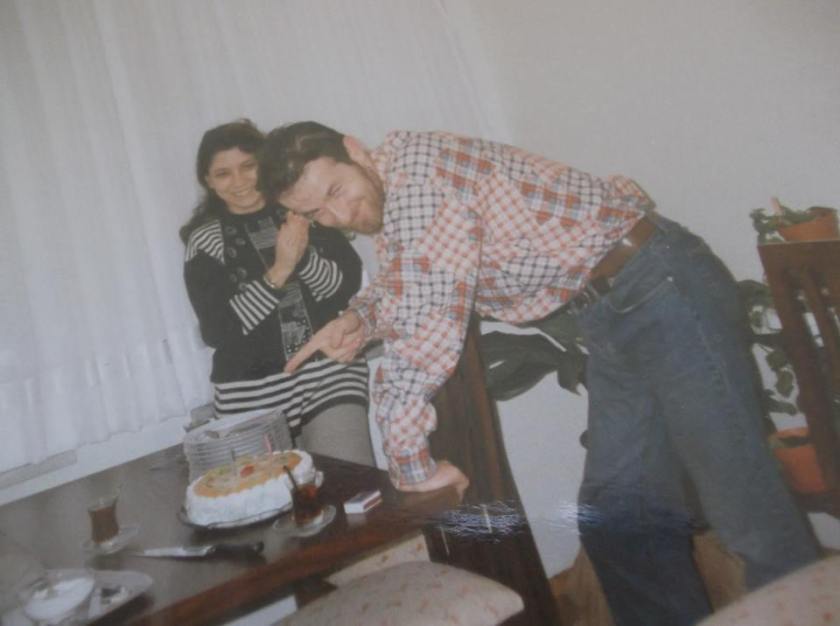 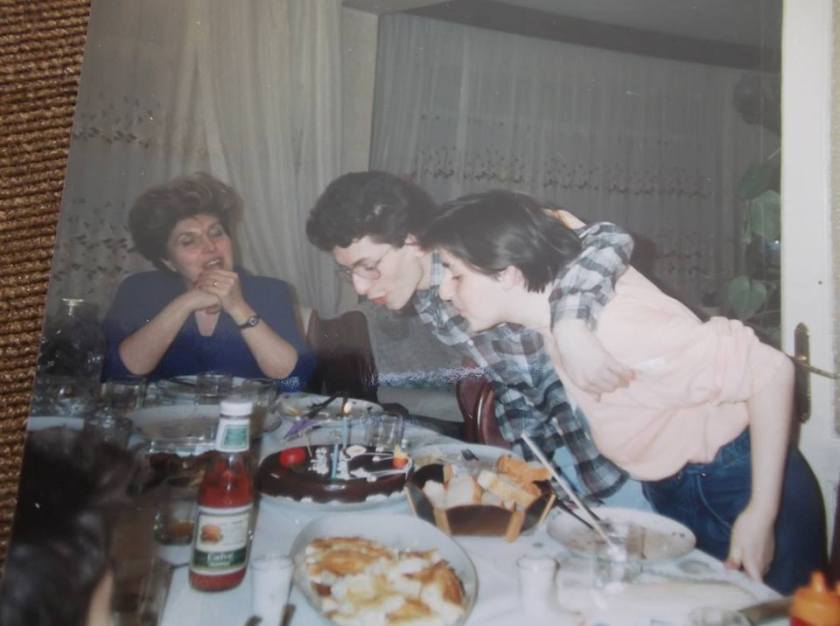 Right this moment, I am sitting in a cafe in Oslo called Kulturhuset, surrounded by a language I do not understand, people with friends and families, a cup of rooibos tea, lots of books on the shelves, pages from books on the walls, big red curtains, a disco ball and beautiful wall tiles next to the cashier. I hear Iggy Pop singing. I am 3400 kilometres away from some of my family in Istanbul, 4100 kilometres away from my parents in Sinop, and some 15-20 years away from my memories of long weekend lunches around the big, wooden table in my family’s home. At that time, all these Nordic countries that I am living in and wandering about were far, unknown, cold places that we mostly only heard about in Eurovision song contest. “Good-eeeevening-from-HELSINKI!”, “Hellooo-from-OSLO!”… Bülent Özveren, the Turkish TV host who presented Eurovision each and every year would make the same comments about how those neighbours would always vote for each other and never for Turkey. I practically grew up listening to and watching Bülent Özveren, I wonder if he is still the host of the show.

The long hours of family around one dinner table are just pieces of memory now. Of course, if we can ever come together from around the world once in every few years, we have these dinners again. And this time we are even more crowded, with husbands, wives and kids… My nephews and nieces watch us adults making jokes that they don’t always understand, just as I did years ago. They keep to themselves mostly and there may be a kids’ table if we are too many. We always tell old stories and we still laugh. We are still very noisy. And food unites us. 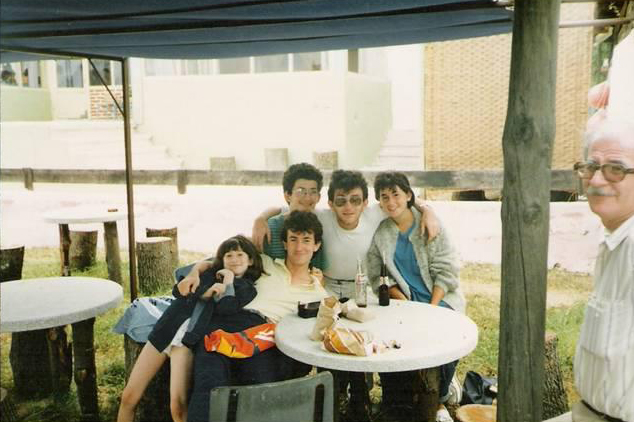