As I wrote in my previous post yesterday, exactly 1 year ago, I started blogging about food. I could never imagine how much it would change my life. I could never imagine that baking would be my whole life and that I would even think of a career with it.. But here I am, after a year’s adventure of baking and cooking – I finally became comfortable in the kitchen.

So I’ve been thinking for a while, which recipe should be the first one I give after the first birthday.. Should it be something Turkish, should it be a birthday cake, should it be something Finnish..? But of course, Finnish! Having Shrove Tuesday this week, what could be a better idea than giving the recipe for the famous Finnish pastry “Laskiaispulla”?  You can also find this bun in other Scandinavian countries, but I am not sure if there is any difference between each other.

These buns are really cute with a little hat on them. In between the bun and the hat, there is either cream and almond paste or cream and jam. I found almond paste in K-market during the weekend, but I decided to use the jam I have at home – next time, though, I am going to make it with almond paste. And as in any other Finnish pastry, the signature ingredient is cardamom! I feel that without cardamom, you cannot make Finnish pastry! (Well of course you “can”, but it would not be as authentic as it should be..) 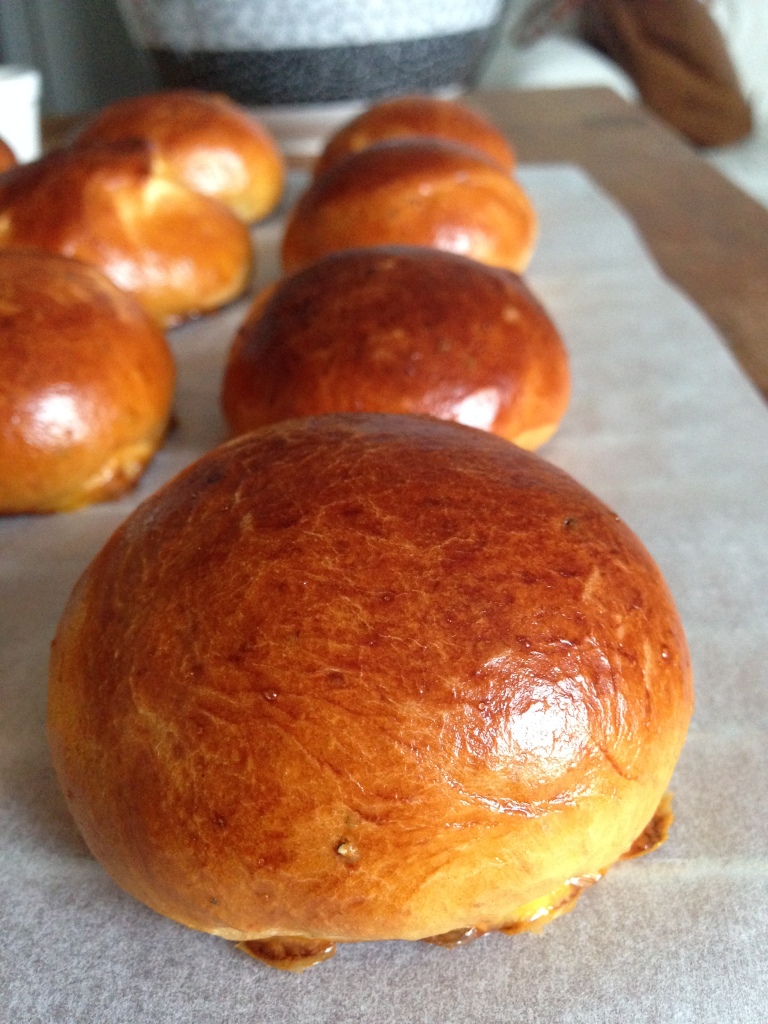 So enjoy your buns and do not eat them all yourself – share with friends!! And, (this is for friends in Helsinki) if you have time, go and eat Laskiaispulla at least once in Cafe Esplanad – but try to go there as a group of 4, since they are the biggest buns ever!!!!

To put on top:
Powdered sugar 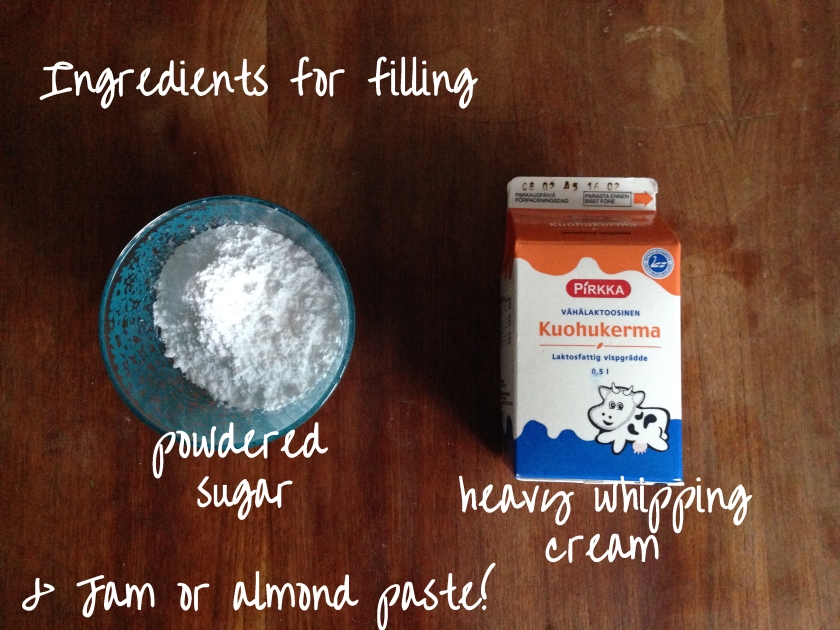 1. In a small bowl, crack the egg and beat it using a fork. Divide this beaten egg in two equal parts and save 1 part for later (you will use this to brush the buns with, before you bake them). 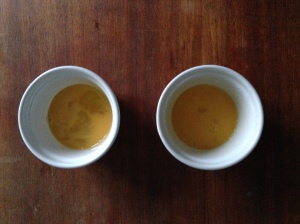 3. Put the butter in a pan and melt it. When it melts, put aside and cool to room temperature. 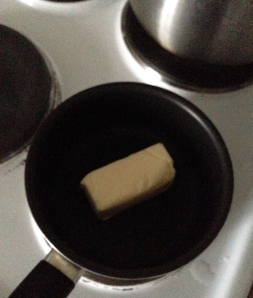 4. In another pan, put milk and heat it to 42C. If you do not have a thermometer, then heat it to a temperature that is warm but not boiling, it should feel warm if you just touch with the back of your finger but not burn it.

5. When the milk is warm, take it away from the heat. Add sugar, salt and cardamom and whisk it until the sugar dissolves.

7. Put 1/2 egg that you prepared in step 1 in the milk mixture and whisk it until egg is partially incorporated. 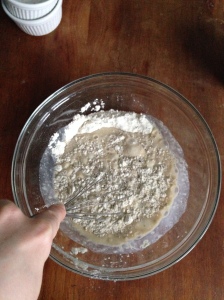 9. Now you will start adding the flour. The consistency of the dough that you should get is soft and smooth. If you put too much flour, it will get very hard when you bake. Since every flour is different than each other, I suggest you add flour bit by bit (for instance, I added 1/2 cup / 1.2 dl flour each time). After each time you add flour, either whisk it, or just use your hand to mix. When it has some consistency that is close to a soft dough, stop adding flour.

10. In the dough, pour melted butter and continue kneading to incorporate the butter. 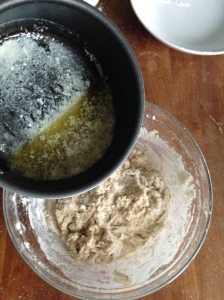 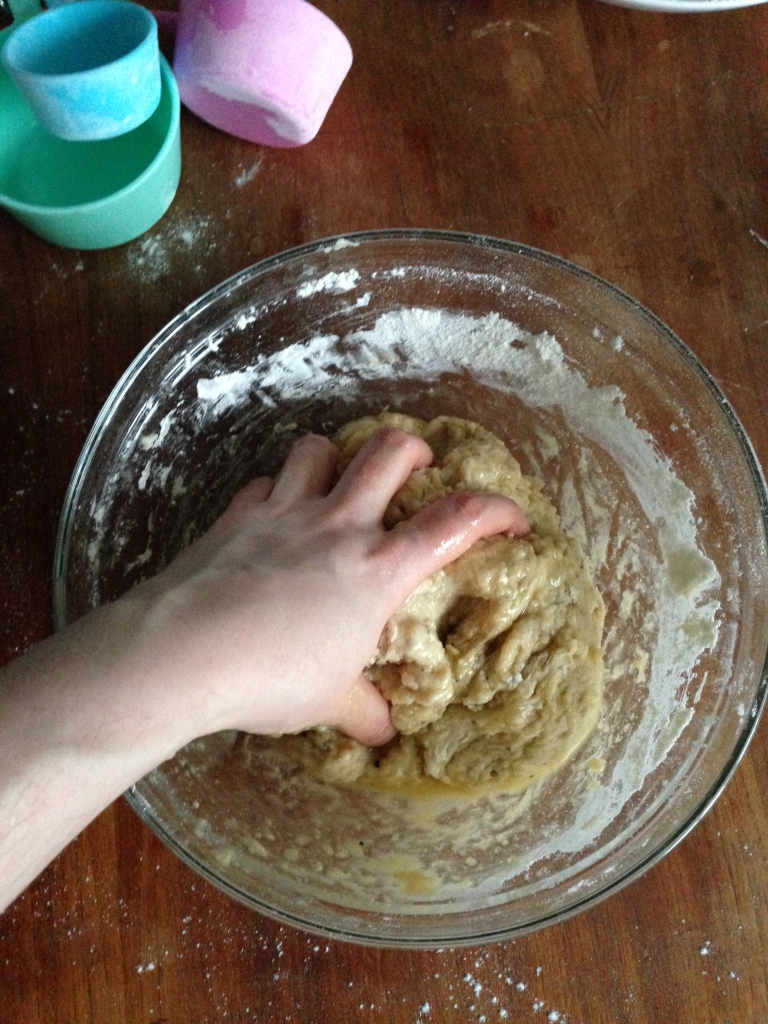 11. After butter is incorporated, I switched to kneading on the table since it was easier this way. If you are going to do the same, just flour the surface with a little flour (not too much), put your dough on it and knead the dough until you get a smooth and soft ball of dough. In my case, it took about 8 minutes of kneading. 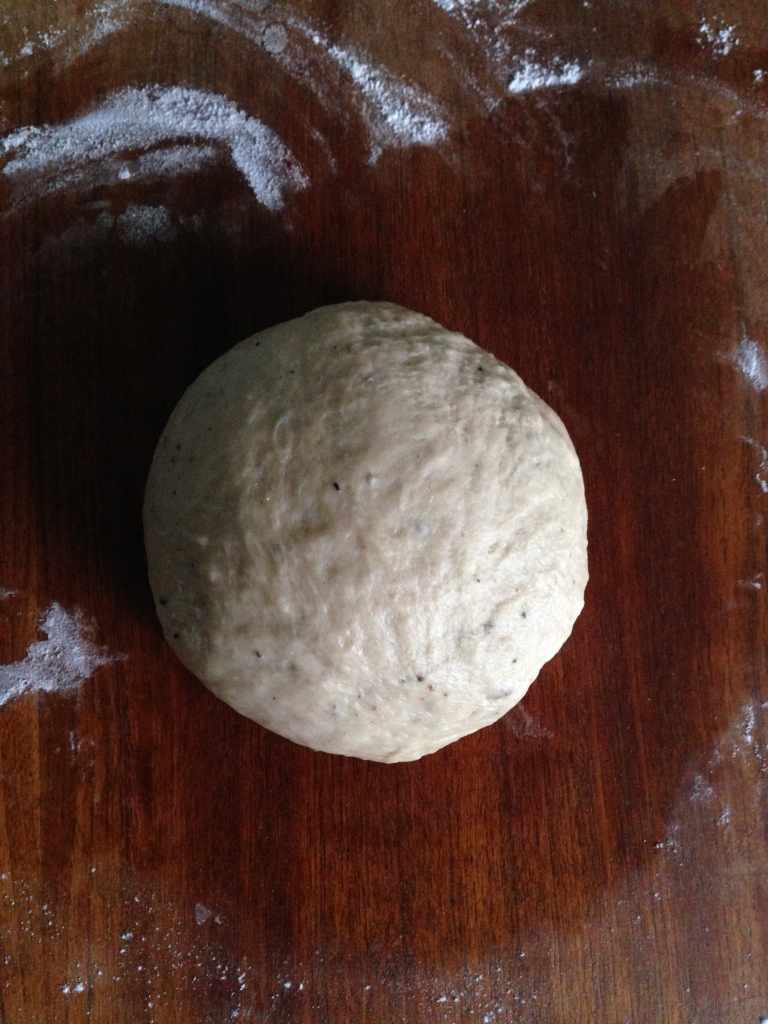 12. Put the ready ball of dough in a clean bowl, cover it with a damp cloth and leave it in a warm place to let it rise, until it gets doubled in size.

13. While waiting for the dough to rise, you can prepare the cream for filling. To do that, in a mixing bowl, pour heavy cream and powdered sugar and mix it until you get a hard cream. Put the cream in the fridge until the time comes to use it for filling. 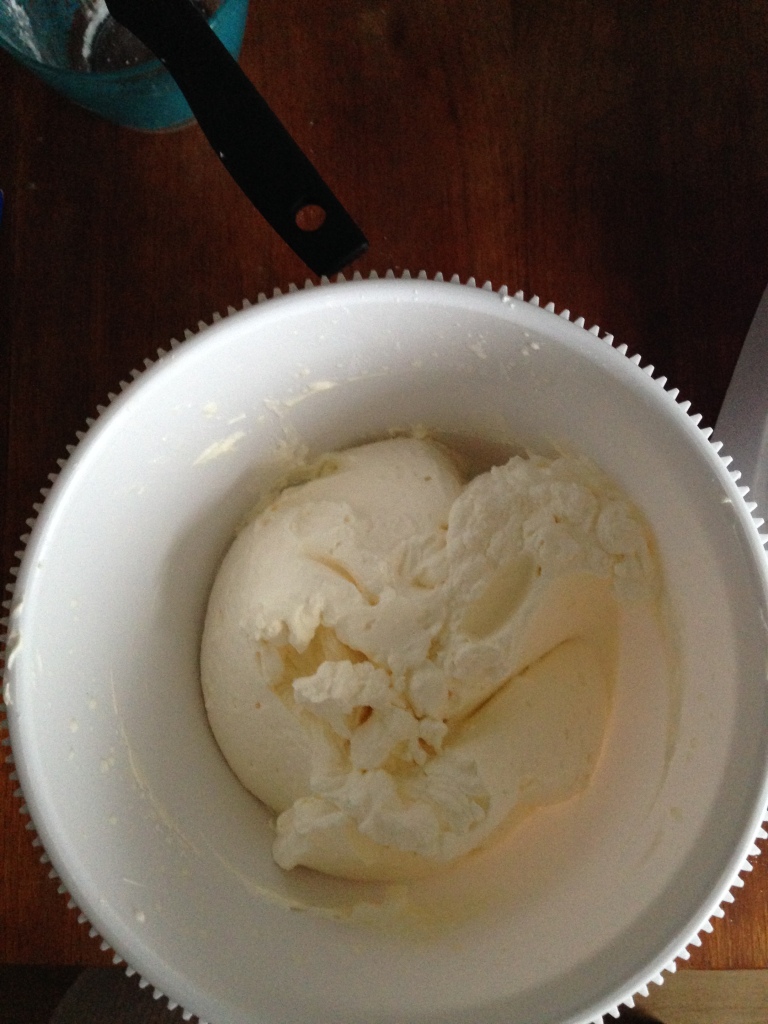 14. When the dough is doubled in size, you are ready to continue. First, flour the kneading surface again. Then put away the cloth covering the dough and punch the dough a few times to get the air out of it.

15. Put the dough on the surface, knead for a minute or two to completely take out the air, then form it into a long sausage. Cut this sausage into 20 pieces. 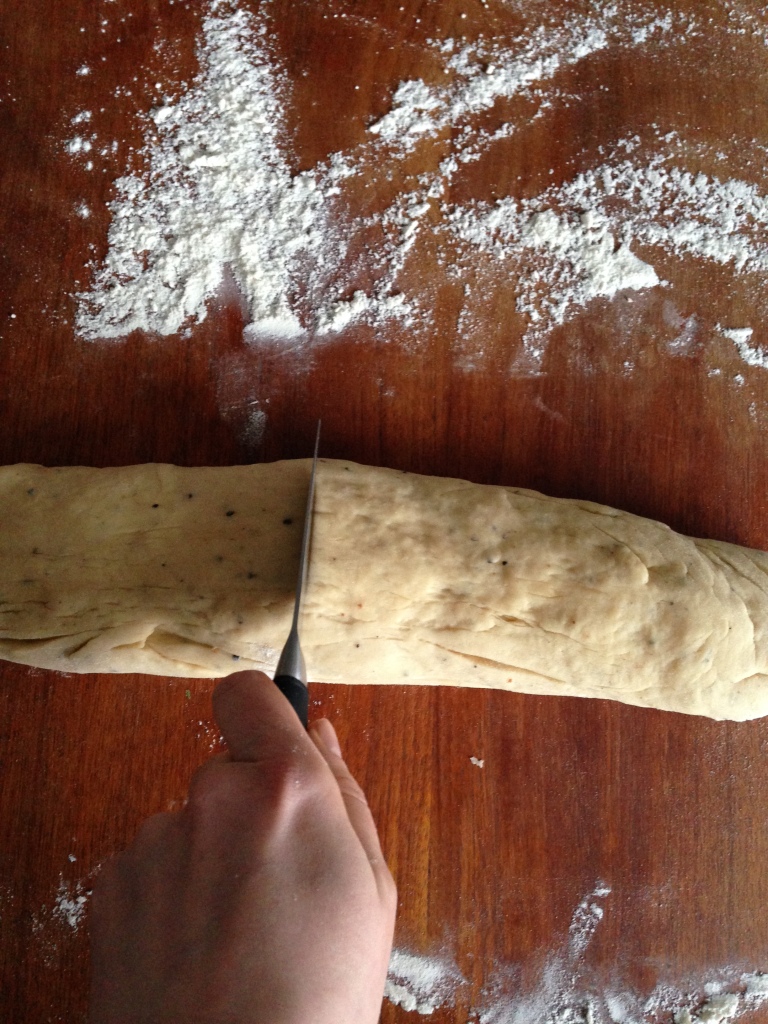 16. Take each piece and form it into a ball.

17. Put a baking sheet on an oven tray (I used two oven trays and so two baking sheets), and put each small ball of dough on the sheet. Give a little space between each ball, about 2 cm, since each ball will rise and get bigger again. When one tray is covered with balls, cover the balls again with a cloth or another baking or anything that is not so sticky, and let the balls rise for 30 minutes in a warm place again. (Sorry but I forgot to take the picture of them like that!!). This second rise is very important, so please do not skip it!!

19. Take the first tray of dough. Brush each bun with egg. Be generous. (If you want to use some sugar flakes, then this is the time to use them – on top of egg-brushed buns.) When all buns are brushed with egg, put them in the oven, in the middle rack. Bake them for about 10-15 minutes, until they are nicely browned (but not too browned or burned!!). 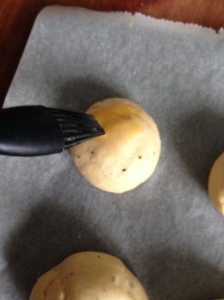 20. When the buns are brown enough, take them out and leave them to cool completely. 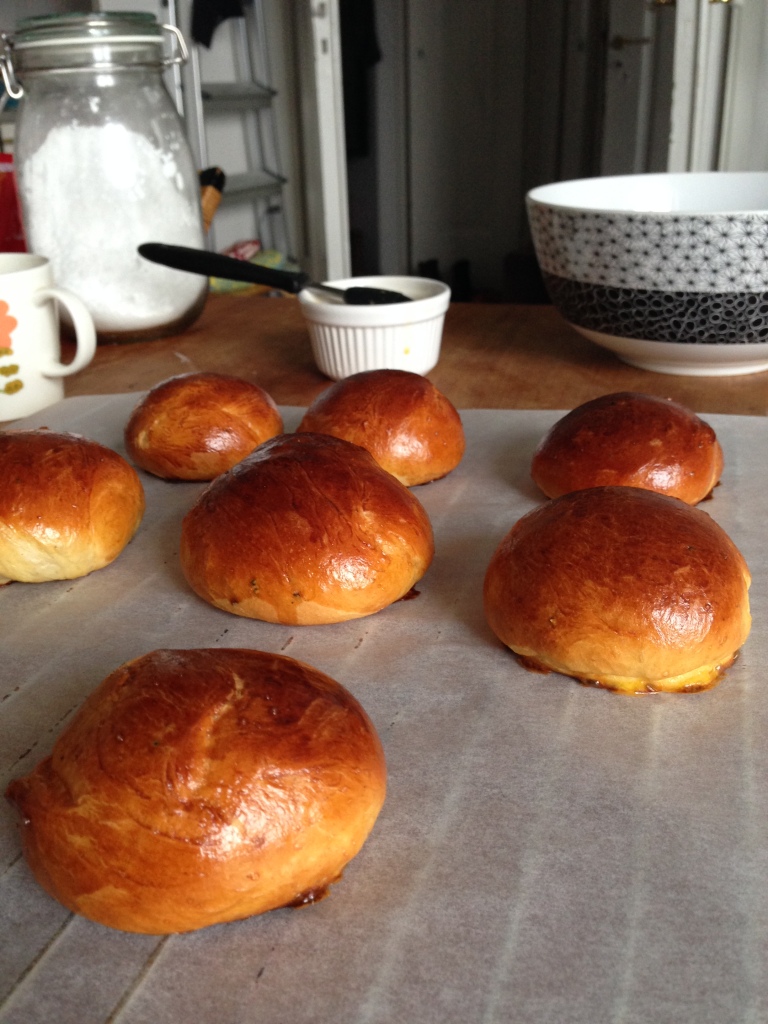 22. Now comes the assembly part: Take 1 bun and cut a bit of the top part as seen in the picture. You can cut it in two equal pieces or you can just cut a small piece to make it look like a little “hat”. 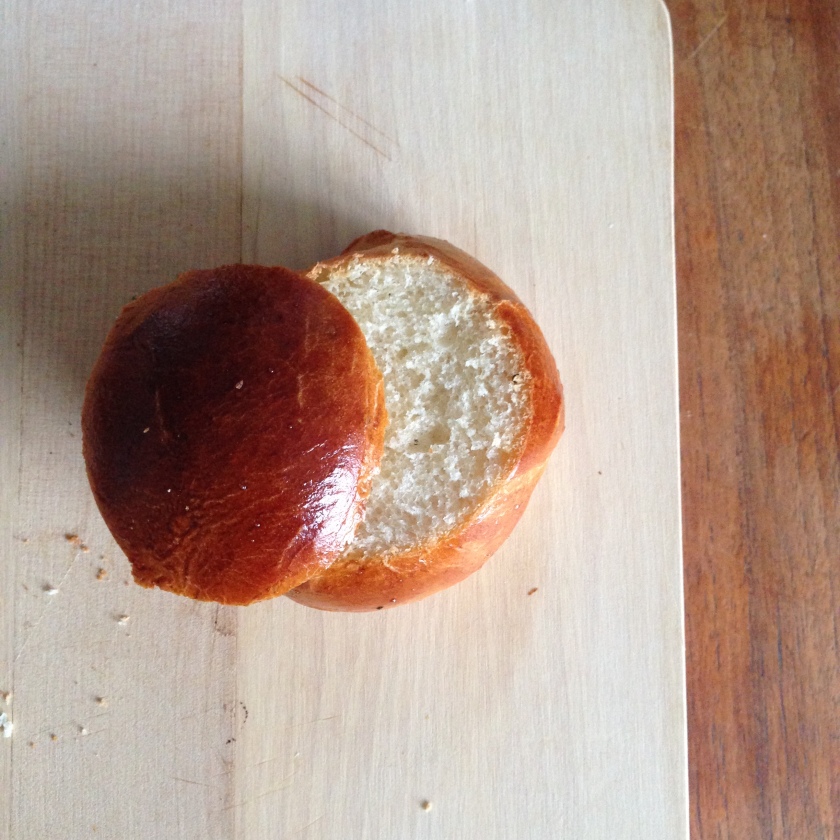 23. Take the lower piece of the bun, scoop out a small piece from the middle of it and put one small spoonful of jam in that little hole. Then take the cream and pipe cream on top of this piece with jam, and be generous as in the picture. 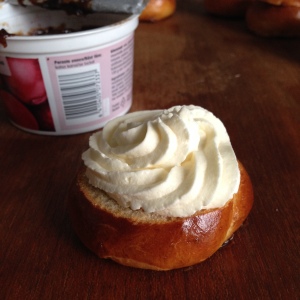 24. Put the upper piece of the bun, aka the “hat”, on the lower piece. Pour some powdered sugar on the bun to cover the head fully. There you go! You have your first bun ready!! Now do the same for others. Smile while you are assembling the buns since they are the happiest and cutest buns in the world!!

Join 1,196 other followers
Follow My Dear Kitchen in Helsinki on WordPress.com